How to prune lavender

Lavender is an easy-to-grow, evergreen shrub with deliciously scented flowers and foliage. If left to its own devices, lavender can become bare and straggly. But pruning a lavender plant will prolong its life, maintain an attractive shape and ensure plenty of flowers the following year. Here’s how to prune lavender.

What are the main varieties of Lavender?

French lavender flowers continuously from May to September (with dead-heading). Flower spikes are topped with distinctive bracts or 'wings' and are borne on short stems. French lavender is borderline hardy, coping with temperatures between -5°C and -10°C (14-23°F) for short periods.

Lavandins are sterile hybrid lavenders, which are more vigorous than common lavender. Flowers are borne on very long stems, mainly in July and August. Lavandin is slightly less hardy than common lavender, but will cope with short periods down to -10°C (14°F).

When to prune lavender

Carry out lavender pruning in late August, just after flowering has finished. Don't leave it too late, as any re-growth will need time to harden up before the first frosts. You can also trim your lavenders in April, but this will delay flowering slightly.

How to prune lavender

Using either secateurs or hand shears simply trim back the whole plant by 2.5-5cm (1-2"). Lavenders thrive if pruned back fairly hard but never cut back into old wood as most lavender plants won't re-grow from this. Always make sure there is some healthy green growth left for the plant to regenerate from.

Dead-head French lavenders throughout the summer as they’ll flower continuously from May to September. Deadheading will also encourage more flowering through the season.

Don’t leave it too long before you cut your plants back. Although your plants may look a bit sad after pruning, they'll quickly put on some new growth before winter, ready for another fabulous display next summer!

Watch: How to prune lavender with Van Meuwen

Lavender plants need regular pruning to prevent them looking thin and woody. Learn how to prune Lavender with Van Meuwen. 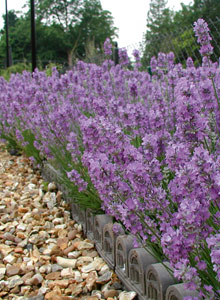 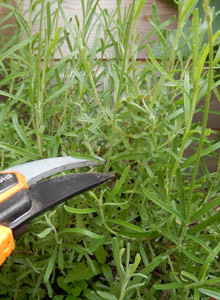 Lavenders tolerate fairly hard pruning, although make sure there is some healthy green growth left for the plant to regenerate from.

Sign up to the Van Meuwen Gardener's Club for Special Offers