How to prune roses

Pruning rose bushes is very easy if you follow a few simple steps. To get the best results, it helps if you concentrate on why you’re pruning. You’re trying to encourage new, vigorous shoots to replace older, weaker ones, and to produce an attractive overall shape. For further information about how to plant and grow roses, take a look at our guide.

When to prune roses

Roses are normally pruned in their dormant season, between autumn and early spring, although during severe winters it’s best to wait until late-February or March. Most newly planted roses should be pruned hard after planting, to 8cm above ground level. The only exceptions are climbing and rambling roses, which should be allowed to grow freely.

How to prune roses

It's a good idea to wear thick gloves when pruning roses and to use clean, sharp secateurs. When pruning, make a cut at an angle above a bud, with the cut facing in the direction the new shoot will grow. All roses need to have any dead, damaged or diseased shoots removed first, cutting them back to healthy wood.

It’s helpful to know what type of rose you have before pruning, as they all have different requirements.

How to prune hybrid tea and floribunda roses

These modern roses are the most commonly available and flower on new or current season's wood, so can be cut back quite hard each year.

After removing any dead, damaged or diseased shoots, thin out weak growth or crossing shoots to leave a well-balanced framework. If the bush is very crowded, remove some of the old shoots at the base to open up the rose bush.

For hybrid tea roses such as 'Diamond Jubilee', shorten the remaining shoots to 4 or 6 buds from the base (about 15cm or 6 inches).

For floribunda roses such as 'Queen Elizabeth' shorten the main shoots to about 30cm (12 inches) from the ground and reduce any remaining side shoots by about two-thirds of their length.

How to prune shrub roses

Mature specimens will benefit from having a few older stems removed each winter, cutting right down to the base to encourage new vigorous growth. Never reduce the number of stems by more than a third. The remaining side shoots should be reduced to two buds.

How to prune climbing roses

Climbing roses such as 'Golden Showers' require only minimal pruning in late-autumn or winter, after flowering has finished. For the first two years, no pruning should be carried out - just remove any dead, diseased or weak, twiggy growth.

The most important aspect of care is to train the shoots along their supports to ensure an even coverage of the wall or fence and encourage flowering.

Once your climbing rose has established, continue to annually prune out any dead, damaged, diseased or twiggy growth in late autumn. Also prune any flowered side-shoots back to about two-thirds of their length. Do not prune the main shoots unless they have outgrown their allotted space, in which case prune as necessary to reduce the overall size.

As your climbing rose ages, the base may become bare. To renew growth at the base, cut back one or two of the old main shoots to within 30cm (12 inches) of the ground. New vigorous growth should emerge in the spring.

How to prune rambling roses

Rambling roses such as 'American Pillar' are pruned in late summer. For the first two years, only prune out any dead, diseased or damaged growth.

Once your rambling rose has covered its support, completely remove about a third of all older shoots to ground level. Tie in the remaining shoots to form a well-balanced framework. Shorten all side shoots to leave between 2 and 4 healthy 'buds' (or shoots) remaining. Tying in stems to a horizontal position along their support encourages more flowers to form.

However, if your rose is still flowering in the autumn, stop deadheading, as this may encourage new soft growth which could be damaged by frosts. You can also leave the rose hips (seed heads) on the plant for winter interest if you prefer.

When autumn comes, clear away any fallen leaves from around your rose bushes as these may carry diseases such as black spot, which will overwinter and infect your flowers next year.

We hope this guide has told you all you need to know about pruning roses. Follow these steps and your rose plants will give you beautiful blooms for years to come. 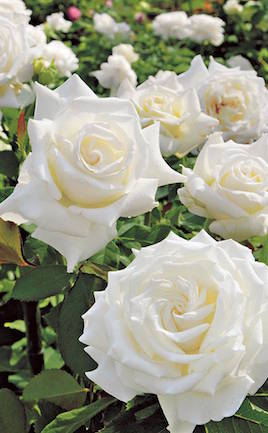 Buy roses at Van Meuwen - find out more on our roses page.

Sign up to the Van Meuwen Gardener's Club for Special Offers